Whatsapp vs Telegram | Which is a better messaging app whatsapp/telegram

When asking the question What are the best messaging apps for Android?

Telegram is ranked 1st(first) while WhatsApp is ranked 4th(forth). The major difference in the software is that Telegram allows you to copy/paste videos, gifs, images, geo-location, and documents, drag over files for practically any time up to 1.5GB in size. Images can also compressed.
While whatsapp only just added a few of those features.

WhatsApp now has a user base of more than one billion, but Telegram is quickly catching up. In February 2016 Telegram claimed over 350,000 users signed up every day, on top of the existing 100 million daily active users.

Telegram on the other hand faces a lot of criticism for not being fully encrypted by default. But they were the first mass-market messaging app to offer any encryption, and as such were often referred to as the “encrypted chat app” in the media.


WhatsApp Messenger is a freeware and cross-platform instant messaging and Voice over Internet Protocol (VoIP) service. The application allows the sending of text messages and voice calls, as well as video calls, images and other media, documents, and user location.The application runs from a mobile device though it is also accessible from desktop computers; the service uses standard cellular mobile numbers. Originally users could only communicate with other users individually or in groups of individual users, but in September 2017 WhatsApp announced a forthcoming business platform which will enable companies to provide customer service to users at scale. All data used in this platform is end-to-end encrypted. Whatsapp runs on iOS, Android, windows phone 8, windows 10 mobile. 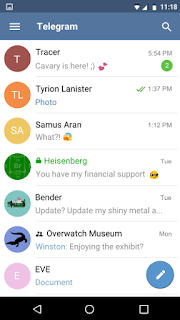 Telegram is also a cross-platform messaging service and also makes use of the (VoIP)  service.

Getting Started: Which Has the Better Sign up Process?

For WhatsApp, you can only sign up through a mobile phone app, while Telegram lets you sign up anywhere, even with their web app.

But both Telegram and WhatsApp use your phone number for authentication. This is convenient at first but leaves serious security concerns. A hacker could take over your account by diverting text messages to their own number by either tricking your mobile phone provider or even colluding with them. The latter is especially of concern if your adversary is your local government.

For the encrypted WhatsApp, this will allow hackers to impersonate you, but with Telegram, someone could gain access to all your unencrypted chats and group chats.

Though WhatsApp has superior encryption, Telegram has the option to set a secondary password, which is effectively two-factor authentication. A hacker will need not only access to your phone number but also a password to get to your contacts.

Giving users no option other than signing up with a number is not a good practice. Phone numbers can easily be linked to an identity through location, and many countries require you to show ID when buying SIM cards.

Both Telegram and WhatsApp should allow you to sign up for their services through other identifiers, such as usernames or email addresses. WhatsApp needs a secondary password solution, and both WhatsApp and Telegram should probably make it mandatory.

Telegram’s apps are all open-source, which means you can build them yourself, rather than downloading them from the app stores. You can modify the apps, and researchers can look through them to find errors in the implementation of security features. You can also build a Telegram integration for your own application, which makes it more accessible to people who do not have access to official app stores (for example if their country blocks them), but it also means a susceptibility to backdoored or malicious versions.

Open-source is pretty awesome, and Telegram impresses further with its wide range of supported platforms. There are the usuals such as iOS, Android, and Windows Phone, but there is also browser apps for Firefox and Chrome OS, a Pidgin plugin, desktop apps, and even a Command Line Interface! Sadly, though, the Windows and Linux apps are just wrapped versions of the browser app (Webogram), which does not support end-to-end encryption.

Which Is the Least Intrusive?

WhatsApp requires access to your entire address book to even function, Without this access, WhatsApp is practically useless.
On Telegram, you can start chatting without giving the app access to your contacts. You also don’t have to hand out your telephone number to anyone you want to chat with. Instead, you can set a username and hand that out instead. That’s a pretty great, and privacy-friendly, feature.

Both Telegram and WhatsApp allow you to control the “last seen” stamp, and both allow a compiled list of blocked users.

The fact that you can easily log into Telegram from multiple devices can become a security threat, though the platform mitigates this well by making your “active sessions” visible in the settings, where you can also easily disable anything that is not you.

Telegram will also automatically delete your account, along with all the information contained within, after six months of non-use (you can set this to one month, or a year), so if someone else were to get your phone number after you abandon it, they wouldn’t get access to your account.
In Telegram you can additionally control who is allowed to add you to groups, making it harder for spammers to annoy you.

Telegram’s ‘secret chats’ come with a few more perks than just encryption; You get notified when the other party takes a screenshot, and you can set a self-destruct time from anywhere between one second to one week. After the destruction, the app deletes all the messages on both devices (starting from when the other party read the message), putting you more in control of what your phone stores, and what information could become vulnerable if your phone is stolen or lost.

Whatsapp chat are usually encrypted while Telegram are not.

Telegram permits video conferencing while Whatsapp does not

Secret chats in Telegram connot be backed up, while WhatsApp chats can be. On iOS, you get the option to backup your chats in iCloud, while on Android you can save them to your Google Drive. On other platforms, you might have the choice to download them as a file. When you or one of your contacts enables this, your chats are only as secure as this backup. Be careful!

Verdict: Telegram wins in most aspect but whatsapp is king in encryption, and encryption is essential so whatsapp .you_know_the_rest.
lakol Social Social media telegram whatsapp